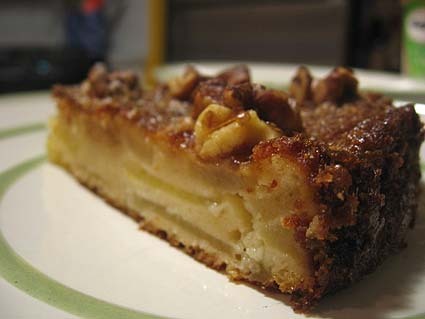 I don’t know what it was but last weekend I was totally into baking things in cake pans. I made a quiche (well, that was in a pie pan) but then also this cake. Oh! I remember why now, I have this new ginger apple hair conditioner that I have been using that smells so good. It totally made me want to bake something apple-y. Then I found the recipe for this cake and there you go.

Okay, originally, the topping recipe called for white sugar. I decided to do it with brown sugar for fun. Oh, it was fun. I also added walnuts and at the advice of many posters at the Food Network site, I increased the oven time a little bit.

The original recipe said to use “baking apples” — I opted for a mix of apples. I also found that 3 apples was quite enough, once sliced up. Speaking of which, slice the apples thinly, into wedges, like you were making an apple tart. They will bake up really nicely stacked up — you will “ooohhhh” and “ahhhhhh” once you cut into the cake! 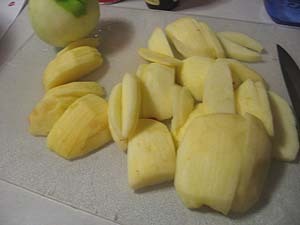 Preheat the oven to 400 degrees F. Butter a 9-inch springform pan and set it aside. A regular 9-inch cake pan worked for me. I buttered and floured well (actually, I used Pam for baking!) and I had no problem getting the cake out. You’ll just need to flip upside-down onto a plate and then flip again onto another plate to get the right side up. More on that later… 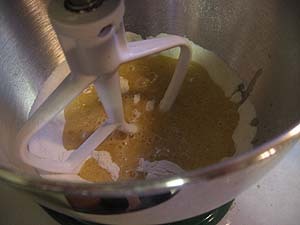 In a large bowl, combine the flour, sugar, baking powder, and salt. Stir to blend. Add the vanilla extract, eggs, oil, and milk, and stir until well blended. 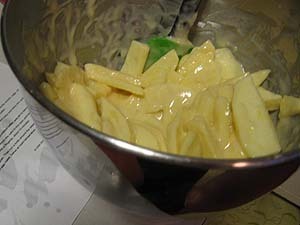 Add the apples and stir to thoroughly coat them with the batter. Your bowl will contain mostly apples, covered with a bit of batter. 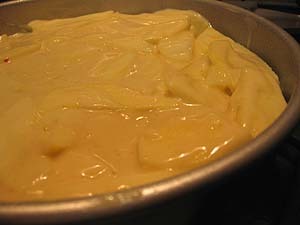 Spoon the mixture into the prepared cake pan. Place the pan in the center of the oven and bake until fairly firm and golden, about 35 minutes. 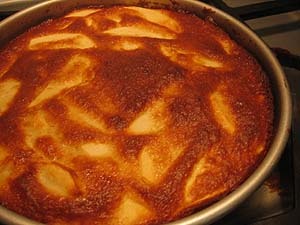 Meanwhile, prepare the topping: In a small bowl, combine the sugar, egg, and melted butter, and stir to blend. Set it aside. 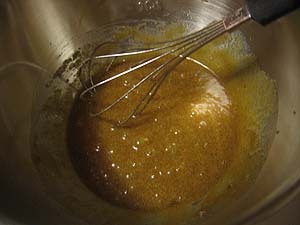 Remove the cake from the oven and turn the oven down to 350 degrees F. Pour the topping mixture over the cake and sprinkle with the walnuts. 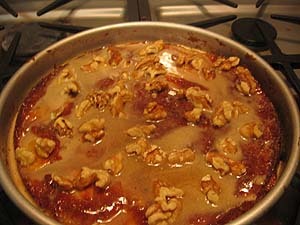 Return the cake to the oven and bake until the top is a deep golden brown and the cake feels quite firm when pressed with a fingertip, about 15 minutes. After 10 minutes take a peek and make sure the brown sugar is not burning. 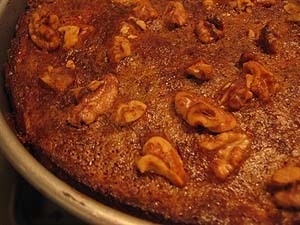 Mine was fine, but I was a little worried. Also, make sure you are baking the cake in the lower-middle of the oven and not a rack near the very top of the oven. Transfer the cake pan to a rack and allow to cool for 10 minutes. 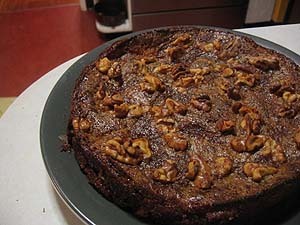 Then run a knife around the sides of the pan, and release and remove the springform side, leaving the cake on the pan base. Or, after running the knife along the edges, put a plate over the top of the cake and flip onto the plate. The cake will be upside down. Take another plate and put that on top of the cake and flip again. The cake should now be right-side up on the 2nd plate. 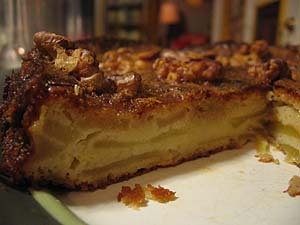 Serve warm or at room temperature, cut into thin wedges. Very good with a little vanilla frozen yogurt on top while still warm!