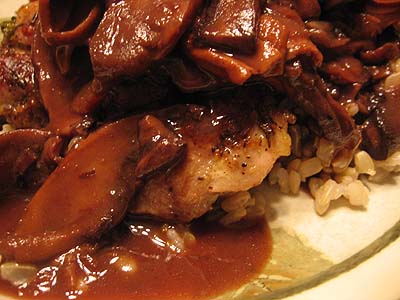 Hello. Allow myself to introduce.. myself. I am jwa, the willing target of mlb’s delectable meals. Remain calm! I have temporarily commandeered this blog whatchamacallit to, erm, blog about mlb’s birthday dinner.

mlb and I have a fine tradition of birthday meals. True, it is often she or an anonymous set of chefs at fine restaurants who create the birthday dinner, but it is both of us that consume it, and remark upon its relative merits of toothsomeness, snackability, or gastrodelicentatiousness. It is this tradition that I choose to break in twain — like the snap of a crisp breadstick, or hot thin peppered bacon — and instead cook for her. It is true that I lack her finely honed skills-o-the-skillet, her technique-with-the-tongs, her proficiency-with-the-prosciutto, but while I may lack talent, I also lack the sense to know when to stop. Let’s go!

For this birthday, I agonized over my choices. I am most comfortable with the pasta meals, having perfected the elusive al dente technique and my own personal garlic-olive-oil-tomato-sauce-parmesan-cheese extravaganza. Alack, this, while tasty, is a well-worn rut on the winding rattlesnake trail that is our relationship. So, I knew it was time to branch out. Live large! Go for the gold! The gusto! Gustave! Guava! Guacamole! Grenadine! Gravity! Vitality!

Some days later, when I finally returned to my original thought (my stack, while finite, is often corrupted, returning me to places I’ve never been) I realized I had better make a decision and soon; the day — the birthday — was nearly here. I feverishly consulted with Rachael Ray, she of the thirty-minute-meal, and together we came up with:

Bread soup? I thought, the idea rolling over in my skull, how intriguing. And though I hadn’t cooked meat since ’93, I figured I’d give it a shot.

Off to New Seasons Market I went! Gathering ingredients and weighing produce almost like I knew what I was doing. Fortunately, we had most of the ingredients at home, but I did pick up mushrooms, chicken, and onion. New Seasons didn’t have the pancetta that the recipe called for, so I figured I’d stop off at Wild Oats on Division. When the automatic doors opened for me, I at once knew something was wrong. Instead of the lively bustle and shout, there was only a hushed funereal silence. Where before there were dreadlock’d hippies and slumming yuppies, there was instead a forlorn cashier and a few old people. A sign read “GOING OUT OF BUSINESS. LAST DAY FEBRUARY 18th.” The shelves, once lavishly stocked, were bare except for disheveled patches of books, greeting cards, and the occasional packaged spice. The few patrons that were there were looked as stunned as I, seeing a neighborhood fixture committing itself to the big sleep. Over the loudspeaker, Natalie Merchant sang her dirge:

and for seven years, you were loved, I lay golden orchid crowns around your feet..

I decided to skip the pancetta. I then went to Pix, with its fancy desert treats and tightly-spaced checkout counter. Some things are still reassuringly constant. 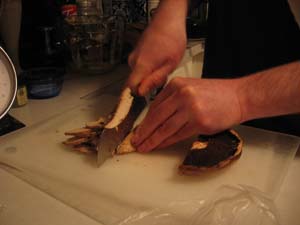 Arriving home, I shared the news of the demise of Wild Oats with Michelle, who was just as shocked as I. I then got down to the task unpacking, sorting, collating, spindling, and so forth. Michelle offered unsolicited advice about preparation; I promptly ignored her and did everything my way. You see, I choose to optimize for time, as in give me enough time to figure out exactly what I’m supposed to do. An hour or so later found me chopping the mushrooms, onions, &tc and putting them in their proper place. There’s a fancy “French” word for this, but I don’t cotton to that sort of talk. ‘taint American, if you catch my drift. All you fancy-foreign-talkers out there: you’re on notice. 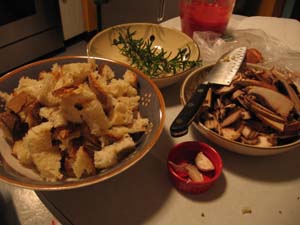 Once everything was laid out, the cookin’ started. We (ok, I didn’t do this all on my own; she helped a little bit) first prepared the bread soup (she beat me to posting about the soup, that sneaky girl). Then we started on the mushroom sauce: get yourself a bowl and heat the 1 cup of chicken stock in the microwave for about 2 minutes. When it’s done, add the porcini mushrooms. Caution: bowl will be hot. Let this steep for a bit. (5-10 minutes, saith Mme. Ray.)

While the porcini mushrooms bloom to fruition in the hot chickeny broth, git yerself a medium skillet and throw down some olive oil, followed by the pancetta (if you can find it), garlic, and shallot. Let them get used to the searing heat (180 seconds worth) and then add the portobello mushrooms that you have so tenderly sliced, plus a bit of salt & pepper “to taste” (you might want to do this when you can actually taste the sauce, though.) Saute until they’re all dark, or ten minutes elapse. Then add the flour. Cook for 1 minute. Add the wine and let it reduce down (60 seconds?) Add the porcini-mushroom-chicken-broth and simmer it down, granny. 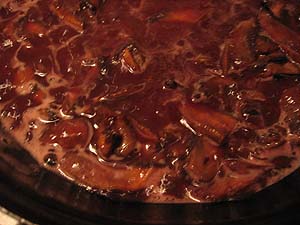 Then came the chicken thighs. I gleefully thwunked off excess fat and seasoned ’em up — olive oil, salt, pepper, and rosemary from the front yard (Oregon: what doesn’t grow here? Oh, that’s right, jobs). Heat up a grill pan and once it’s good and hot, drop in the chicken thighs. Tongs are better than fingers here. Oww. 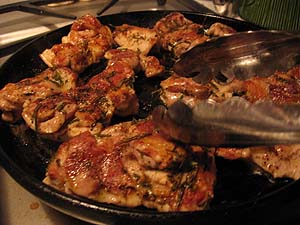 Once in the pan, they began to sizzle delightfully. I could almost hear them singing. Five minutes on each side, plus a little bit more as we futzed with the temperature sensor.

Michelle wanted something else to soak up the mushroomy goodness so she made a quick batch of brown rice. She’s fast that way. Powers that no man can comprehend.

Finally, served up: a bed of rice, on top of which went the chicken thighs, and then on top of that generous ladles of mushroom sauce. Served with a simple zinfandel, though I’m sure any red wine will do (unless you’re picky and/or more wine-savvy than me.)

For dessert, Pix. Continuing with the rosemary theme, I brought home a pear-rosemary tart for Michelle: 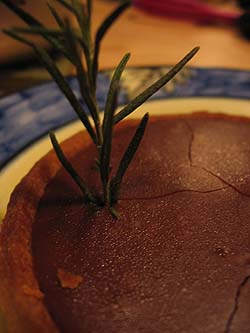 So, with this birthday dinner tucked comfortably under our belts (had to let them out a bit), what does the future hold? What new concoction will I foist upon the unsuspecting mlb? Will I return to my roots, and whip up a special batch of my Top-Ramen and hard-boiled-egg dinner? Will I get Thai takeout and try to pass it off as my own? Tune in next year! (or maybe sooner.)