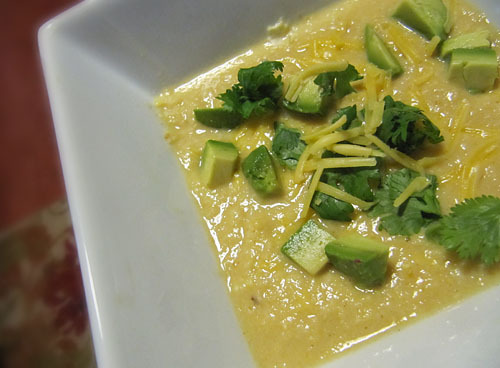 This week’s French Fridays with Dorie features a Corn Soup and that’s about as seasonal as it can be, right now. I really had planned to make the recipe as written, but then…I changed a few things.

1. I had an avocado I needed to use, so I did a Mexican theme with the soup. To this end, I added a little chili powder and excluded the thyme. My garnishes were chopped avocado, cilantro and a little shredded cheese. Also, the soup was served with some Tabasco sauce on the side; the vinegar in that really worked with the rich, creaminess of the soup.

2. I used half milk and half low-sodium chicken stock. This was because I realized that if I didn’t use most of the quart of whole milk I had bought in the soup, I could use that milk making Malted Chocolate Ice Cream this weekend. So, yeah, that won.

I think that’s mostly it. We both enjoyed the soup a lot! It was a great Summer dinner. And of course, I’m really looking forward to the ice cream this weekend. Oh, and here’s a link to everyone’s Corn Soup posts.

Super messy corn in a bowl. 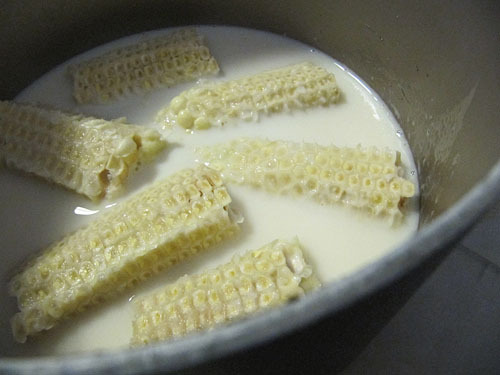 Corn cobs steeping in the hot milk and stock. Ha! Everyone has this picture this week. 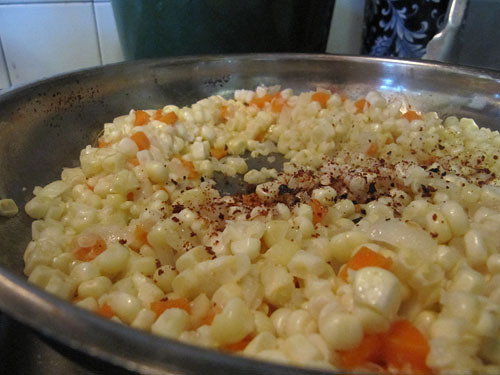 Just about 1/4 tsp of chili powder. I added about 1/2 tsp more while the soup was simmering. 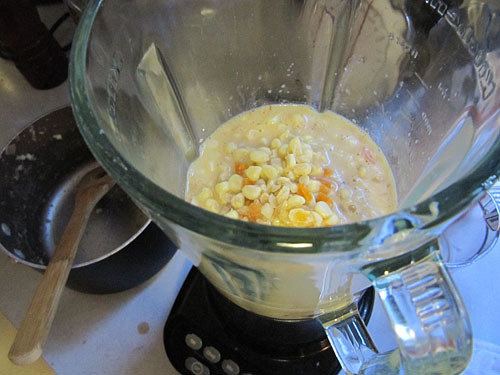 Getting ready to blend. Since it was just a half recipe it all fit in one blender batch. 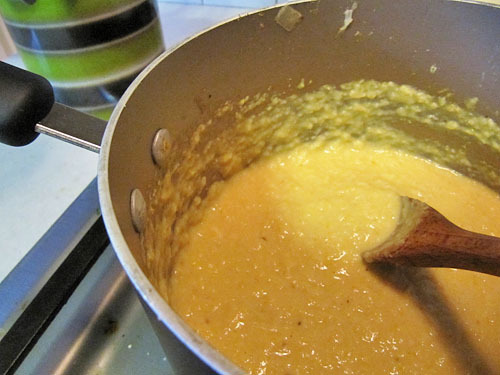 Back on the stove top to rewarm just a bit. 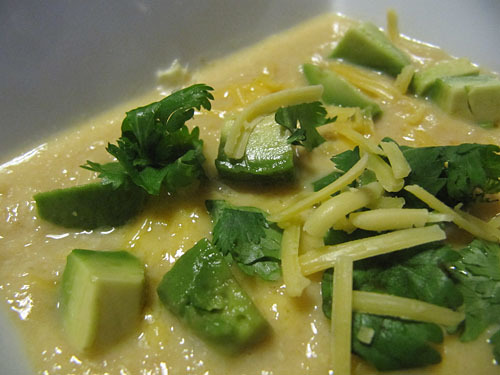 Scary Corn Story from Way Back
Okay, you made it all the way to the end? Great. Want to hear my corn story? So, maybe 10 years ago I bought some ears of corn and I was pulling the husk down to get to the kernels and there’s this huge, worm-like thing on the corn kernels. I scream and throw the corn up in the air and run away. A few minutes later, feeling a bit foolish, I start making my way back to the kitchen to pick up the corn and try figure out how to approach this corn husking task when I look down and the worm-thing is on my sock.

IT’S. ON. MY. SOCK. OH MY GOD! IT’S ON MY SOCK! WAIT?? IT FOLLOWED ME?! Okay, in retrospect, I’m pretty sure it flew off the corn when I threw it in the air and it landed on my foot. At the time though, this was seriously perplexing. Anyway, I screamed again, tore off my sock, threw that in the air and ran into the bedroom. And closed the door. Because you can never be too sure and the worm-thing was apparently all sneaky and stuff. And was after me.

I think a few minutes later I went back out, threw my sock in the garbage and (if I remember correctly), ordered a pizza for dinner.