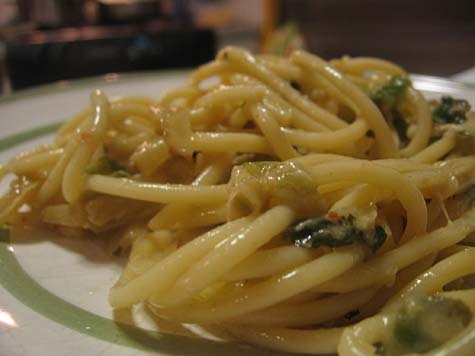 We have been trying to reinstate “Vegetarian Saturdays” since the new year began and because we ate a lot of food last year over the holidays. But then, I’ve also made Flank Steak Pinwheels and Braised Short Ribs, so we’re not all that vegetarian-y lately. Anyway, this was a recent no-meat Saturday meal. I made it without the pancetta listed below and with vegetable broth instead of chicken broth. Next time, I will use maybe half the pancetta called for and probably the chicken broth (just because it’s what I normally have on hand).

That said, this was a good pasta dish! And I love it whenever you can use the pasta water to help make the sauce. I did want a little more fennel, though, so I adapted the recipe below to use three fennel bulbs instead of the original two. I also caramelized the fennel first to give it even more flavor. I can’t imagine how good it would have been if I did that in the pancetta fat.

Anyway, use meat, don’t use meat, this is still a good, satisfying pasta meal. Below, I listed the recipe with the pancetta and chicken broth but just omit/sub those as you wish. Oh and it really wasn’t that spicy at all. 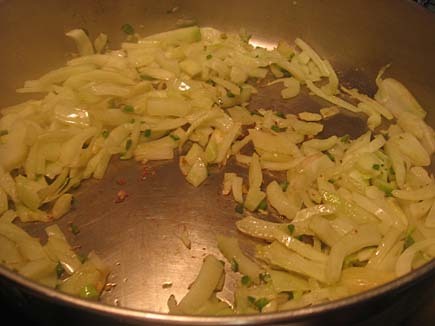 Mix in broth, 2 tablespoons parsley and 2 tablespoons of cilantro, lemon juice, oregano, and fennel seeds. Bring to boil. Reduce heat to low, cover, and cook until vegetables are very tender, 10 minutes or so. Remove from heat. Season with salt and pepper. 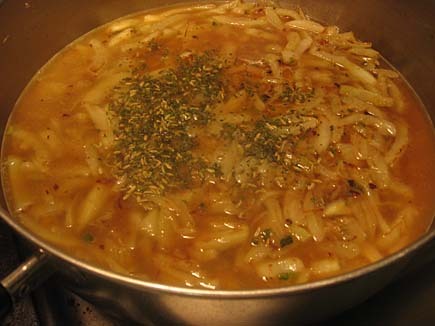 While pasta is cooking, uncover skillet with fennel mixture and return to high heat. Cook until almost all liquid is absorbed, about 5 minutes. Cook pasta until tender; drain. Reserve 1 cup cooking liquid. 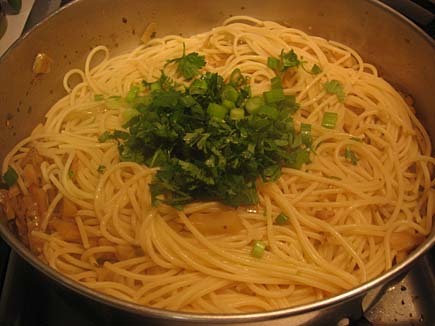 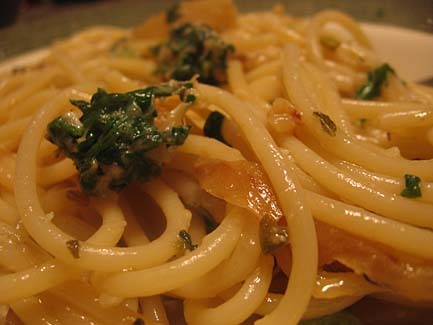 Completely Unrelated and Frivolous: Recently, I read this Slashfood post: 10 Hottest Men in the Food Industry and was kind of befuddled by a lot of their list. Plus, it got me to thinking that I have a little TV Chef crush on Michael Symon. Seriously, how did he not make the list? With his love of pork, meat-themed tattoos, and the goofy, high-pitched, laugh-giggle thing. And heâ€™s really hot too.

4 Replies to “Spicy Spaghetti with Fennel and Herbs”