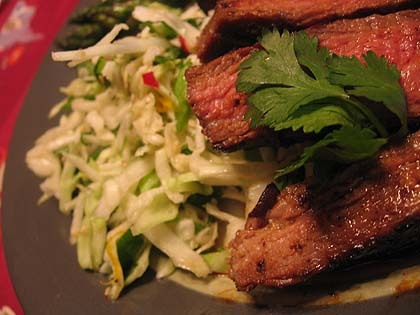 First off, this was amazingly good. I mean I expected it to be tasty but it totally and completely surpassed my expectations. Especially the slaw. And it is finally almost Summer here in Portland. Woo!

Hey — I just realized that while I halved the steak and the slaw portions below, I made a full recipe of the marinade. Hmmm, I used some of that to brush on the meat while cooking, but I probably didn’t need as much marinade as I had, so I think the ratios below are just fine. And, I let the steak marinate in the fridge for about 5 hours. Reviews on epicurious.com also mentioned letting it go overnight. Good advice, I will probably do that next time. 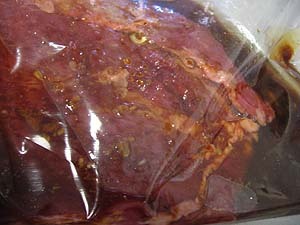 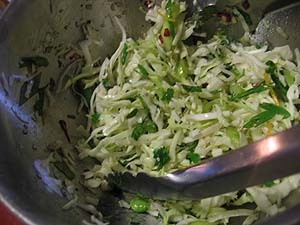 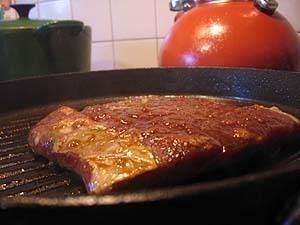 Prepare barbecue (medium heat) or a grill pan over medium-high heat. Grill steak until cooked to desired doneness, about 6 minutes per side for medium-rare. Transfer to work surface. Let rest 10 minutes. 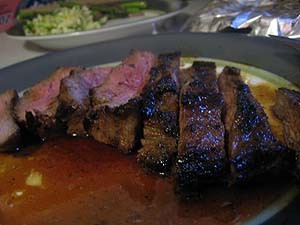 Slice steak thinly against grain and serve with the slaw. Use extra cilantro as a garnish if desired. 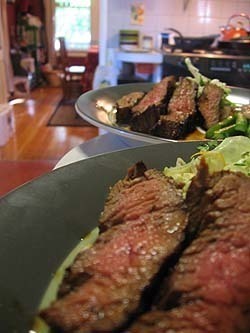 * I keep my ginger peeled and in the freezer in 1-inch pieces. This works well for me and I always have usable ginger in the house. Here I used a microplane grater to deal with the ginger quickly, which is fast becoming my favorite way to mince ginger.