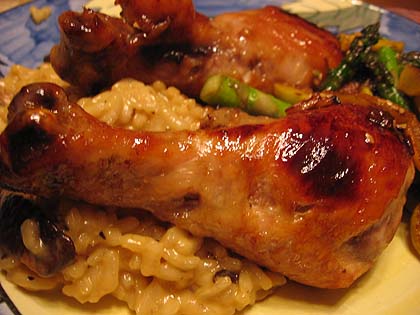 After the Coq au Vin, I had a couple of drumsticks in the freezer. So what did I do? I went to the store, bought six more, then went to Trader Joe’s and got a container of pineapple juice. Why? Because I saw this recipe online (originally from Emeril) and I knew I had to try it. I only used eight drumsticks but made a whole recipe of sauce. Extra sauce is not a bad thing.

I also had some leftover Thai chili paste from PokPok takeout, so I made some coconut risotto to go with the chicken. Same recipe as the link, so I won’t bother reposting here. I’ll just say that the coconut risotto is becoming my favorite pan-Asian meal accompaniment at home.

Turned out awesome. I think we’ll definitely have this again. Oh and there was wok-seared asparagus with garlic, sesame oil and lemon zest on the side.

Preheat the oven to 375 degrees F. In a large pot set over medium-high heat, place the orange juice, pineapple juice, orange zest, garlic, ginger, sesame oil, soy sauce, mirin, sugar and red pepper flakes. Bring the pan to a boil and stir occasionally until the sugar is dissolved and the liquid has reduced to a thick syrup, about 20 minutes. 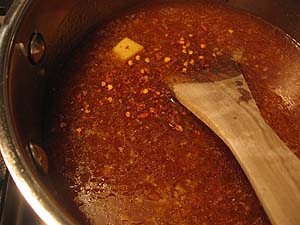 Season the drumsticks with salt. I also sprayed the dish with non-stick spray just to make sure there would be no crying over stuck chicken legs. ‘Cause that would be very, very sad indeed. 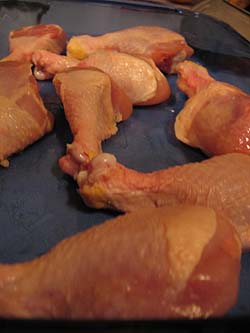 Place on a sheet pan or casserole and drizzle liberally with the glaze. I used about a half a cup for eight legs. Place the casserole in the oven, and cook until the chicken is cooked through and caramelized, about 40 to 45 minutes. 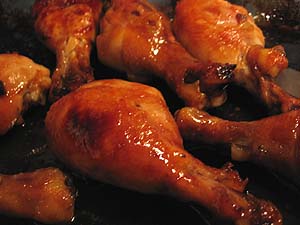 I took the dish out about halfway through and sort of rubbed the legs into the glaze and turned them over. To serve, garnish with chopped fresh cilantro, and the sesame seeds. Serve with the unbaked glaze for dippin’ on the side.

***
Valentine’s Night dinner was spent at Iorio (6pm seating ’cause it was a Wednesday night). Four course meal for $45/a person.

third course (we both had this)
Alder smoked prime rib
with potato torta of goat cheese and thyme
lenta gratin and wild mushroom bolognese
torta was awesome, prime rib was very good but medium-rare was pretty damn rare. It had an almost bacony-tasting crust though, that was really quite delightful

Plus, we also had the three cheese tasting to start with with a glass of champagne each — Sample of cow, sheep and goat milk formaggio for $6.
Very good — a camembert, a gouda and a harder, chalkier cheese, along with some drizzles of sauces and their signature foccacia with squash dip

I enjoyed it quite a bit. Considering how dinner out on Valentine’s Day is typically a crap shoot, this was a good, solid choice. Yay for Iorio!