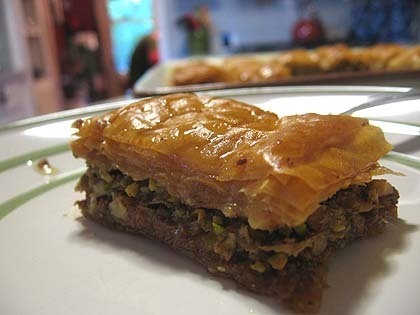 So. Baklava. Mmmm. I have always wanted to make some. Then, last weekend I realized I had all of the components needed. It was like fate shouted down, “Make the baklava!” Really, you have to listen to fate.

I found a pretty simple sounding recipe at the Whole Foods Market web site and off I went.

Notes: The original recipe called for twice as much uh, everything. With two people, that seemed kind of unwise. Below is the halved recipe. If you want more, double all the ingredients and do not cut the phyllo in half. Use 20 sheets full size. I used a combination of pecans, pistachios and hazelnuts for my nuts.

Personally, I’ve found working with phyllo dough to be pretty easy. Just remember to cover it and be gentle. And it if rips or tears a little, don’t worry, it will most likely be unnoticeable after baking.

Mixed Nut Baklava
Adapted from a Whole Foods Market recipe
1 cup finely chopped nuts (can be all walnuts, or any combination of walnuts, pistachios, hazelnuts and/or pecans)
1/4 cup sugar
1/2 tsp cinnamon
10 sheets frozen phyllo sheets, thawed, and sliced in half vertically, so that you have 20 sheets approximately 9 inches by 7 inches
4 tbsp unsalted butter, melted
1/2 cup honey
1/3 cup water
1 tsp lemon juice
1 small cinnamon stick (or a larger stick, broken in half — just use one of the halves)
2 green cardamom pods 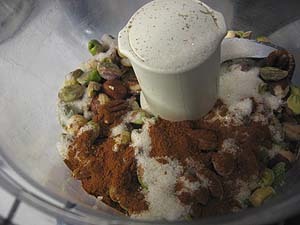 Preheat oven to 350 degrees F. Butter a jelly roll pan or rimmed baking sheet. Mix the nuts, sugar and cinnamon in a bowl and set aside. Alternatively, process the larger nuts pieces, cinnamon and sugar in a food processor, then set aside. 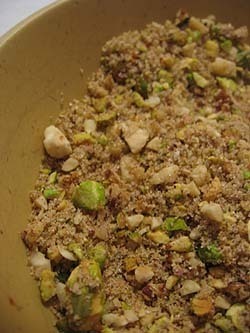 Lay the phyllo sheets out on a counter top and cover with a slightly damp towel to prevent them from drying out. Working quickly, place a sheet of phyllo in the prepared pan, brush with melted butter and then place another sheet on top. Continue with sheets, brushing each with melted butter until you have used 8 sheets. 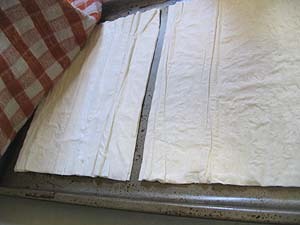 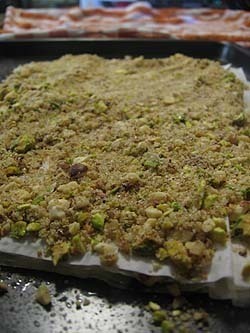 Again, repeat the process of layering the rest of the sheets, one by one, brushing melted butter over each sheet. 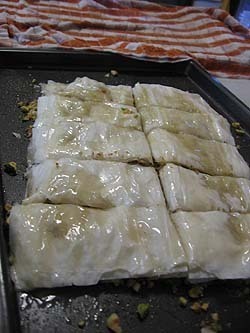 Using a sharp knife, cut the pastry through to the bottom into serving pieces. I made a horizontal cut across the phyllo, then cut vertically five times so I had ten pieces of baklava. Bake for 20 to 25 minutes in the middle of your oven or until the baklava is golden brown. Remove baklava from oven and let cool for 10 minutes. Here, I removed the baklava from the baking sheet and placed it on a plate, pieces pushed together, to keep cooling. I wanted to apply the honey syrup on a surface that I could easily stick in the fridge (ant season!) for storage. 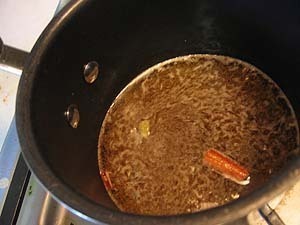 Meanwhile, make honey syrup by stirring honey with water, lemon juice, cinnamon and cardamom in a saucepan. Bring to a boil and simmer for 25 minutes. Cool. 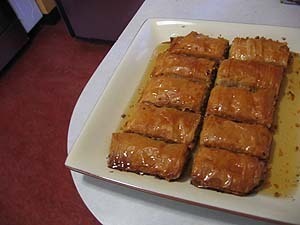 Ladle the warm honey evenly over the baklava. Let cool completely before serving. Now, when you first pour the honey, you will think, wow, there’s so much, maybe I shouldn’t use it all. Don’t worry! The baklava will totally absorb most of it. Really. 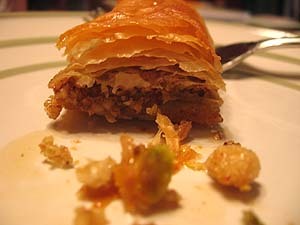