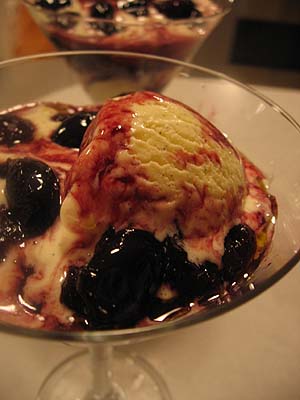 This was a very tasty dessert that I made recently that was based on a dessert that I got while eating at Flea Street Cafe in Menlo Park, CA. I’ll talk more about that meal last week but as soon as I tried this at that meal, I knew I wanted to make it at home.

Especially since I can make my own ice cream and gelato now!

I never would have thought to add olive oil or sea salt to a dessert but it was kind of an interesting thing to do. Very unexpected. And I liked the few sharp tastes of salt with the warm cherries.

I’ve listed two recipes below — one for vanilla gelato and one for low fat vanilla ice cream. Do what you need to do.

The gelato recipe is from Michael Chiarello and the low fat ice cream from The Ultimate Ice Cream Book by Bruce Weinstein. Both were pretty good, but I honestly think I prefer the low fat ice cream. Shocking, I know! You can also, of course, buy ice cream or gelato but if you have an ice cream maker at home, it is a lot of fun to make your own.

Add cherries to a pot, along with the sugar and port. 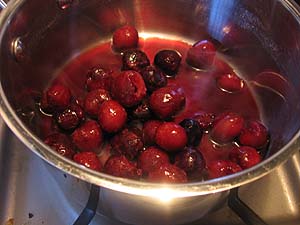 Bring to a boil over medium-low heat and then reduce to low. Simmer for about 20-30 minutes, stirring occasionally, until cherries just barely start to breakdown. This should be enough sauce for up to 4 desserts.

Place the half and half, salt, sugar, and vanilla bean in a nonreactive saucepan. Bring to a boil over medium heat, stirring from time to time to dissolve the sugar. 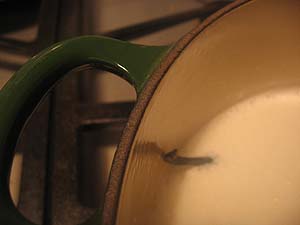 Heat until it’s 180 degrees, stirring constantly, until slightly thickened. Turn off the heat and strain the mixture through a sieve into a bowl. Split the vanilla bean lengthwise and scrape the vanilla seeds into the mixture. 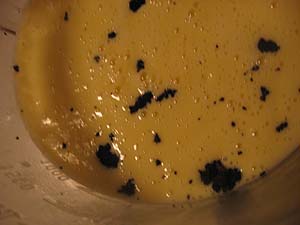 Cool two hours or overnight until well chilled. Then make the gelato in an ice cream machine, following the machine’s instructions. 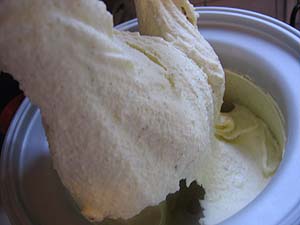 Bring the milk to a simmer and then very slowly, whisk the hot milk into the beaten eggs, whisking constantly. You can also use a bit of the hot mil (1/2 cup or so) to temper the eggs first, then whisk them into the rest of the milk). Pour the entire mixture back into the pan and stir over low heat. The custard will thicken slightly (again, look for a temperature of about 180).

Remove from the heat and strain the custard into a large, clean bowl. Allow to cool slightly and then stir in the sweetened condensed milk and the vanilla bean scrapings.

Cover and refrigerate until cold or overnight. I’ve noticed that this ice cream definitely needs a little freezer time to firm up. The machine (in mine, at least) will get it only barely soft serve. 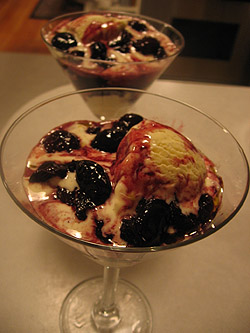 Putting it all together
Place two scoops of your frozen concoction of choice into a martini glass. Spoon some of the warm cherry sauce down over. Use a spoon and drizzle a little olive oil around the inside of the glass — probably about 1/4 teaspoon total. Sprinkle with a pinch of sea salt on top and serve. Delicious!