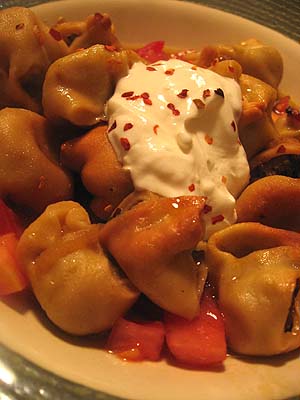 This is an amazing recipe out of the March issue of Saveur. I saw it at the store and was immediately intrigued by what I thought was a big block of hard Irish cheese on the cover alongside some dark bread. It is, you see, an issue devoted to the foods of Ireland. Upon further contemplation at home, however, I have come to the conclusion that the block of pale yellow to the left of the bread is some butter. A little disappointing, but I’m sure the bread and butter are still good. Although, if I had done the cover, the bread and cheese would have been accompanied by a pint of Guinness.

Anyway, while leafing through the magazine, I saw a recipe and article (on page 20), not for an Irish delicacy, but a Turkish one. “Mad for Manti: These Turkish Dumplings Prove Highly Addictive.”

This dish is most prevalent in Anatolia, a region of Turkey with huge archaeological importance, including the site of Ã‡atalhÃ¶yÃ¼k. This, besides being a Neolithic settlement dating from about 7500 BC, is a really fun word to say. (Ca-tal-ya-hook). It was an active site up until the Bronze Age and had a smaller settlement during the Byzantine Empire. This is a good book if anyone is interested.

But, let’s get back to the dumplings. I took a shortcut with my stock and used packaged, free range chicken broth that I simmered with a cinnamon stick and a few cloves. I thought this worked well, but I’ve summarized the recipe to make your own stock at the end of this post. I also added some chopped tomatoes and caramelized onions to my version.

Add the stock to a large pot and add the peppercorns, cloves and cinnamon stick. Bring to a boil, then turn down the heat and simmer for about 30 minutes. Remove cloves, cinnamon and peppercorns and reserve stock.

Dumplings:
Put the eggs, flour, 1 teaspoon of salt and 1/4 cup water in a bowl and mix until a ball forms (1-2 minutes). Turn dough out onto a lightly floured surface and knead for about 10 minutes. Divide dough into 4 balls and cover with a damp kitchen towel. Let rest 30 minutes.

SautÃ© onion in a pan over medium heat, with one teaspoon olive oil. Let cook for about 20 minutes, until onions are caramelized and golden.

Meanwhile, combine lamb, parsley, remaining salt and pepper in a bowl. Cover and set aside.

Roll one ball of dough out to a 11 X 11 inch square. Okay, so my dough was more of a rectangular shape. I think the main thing here is to roll it out, keep it kind of thin, and trim the edges so that you have a clean shape, be it a square or rectangle.

Cut the rolled out dough into 1 ” X 1″ squares. Put about 1/8 – 1/4 tsp of filling in the center of each square. I found it helpful to divide my lamb mixture into 4 equal sections, so that I knew how much filling to use for the four original balls of dough. 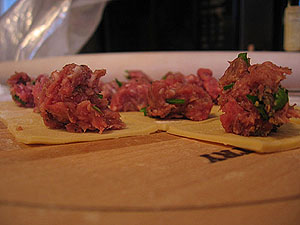 Pull (and stretch a little) the opposite two corners of the square to the middle. Pinch to seal. 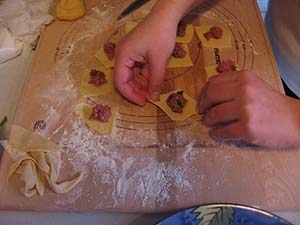 Now, fold the other two corners to the middle and pinch those to seal as well. You should now have a little dumpling! Repeat this process for the squares you have rolled out. Then roll out the other three balls and repeat. I piled all of my dumplings in a single layer, on a big plate. I ended up getting about 12 dumplings from each roll — so, my total was about 48. 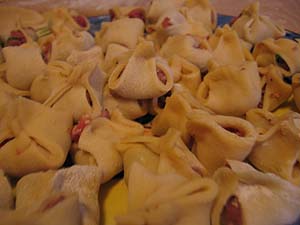 Preheat oven to 400 degrees. Butter a casserole dish and place dumplings into a single layer. Cover with sautÃ©ed onions. Bake until dumplings are golden, about 30 minutes. 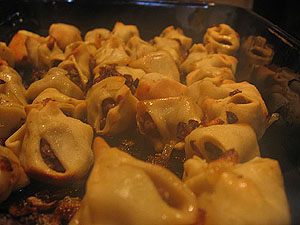 Pour stock over dumplings and onions, cover with foil, and bake until much of the stock has been absorbed, about 25-30 minutes.

Combine yogurt with a pinch of salt and minced garlic cloves. Set aside. When dumplings are done, place some chopped tomato in each serving bowl. Cover with some dumplings and sauce. Add a scoop of the garlicky yogurt and a drizzle of olive oil. In the original recipe, they drizzled clarified butter over the dumplings instead of olive oil. Sprinkle each dish with some of the chili flakes and mint to complete the dish. 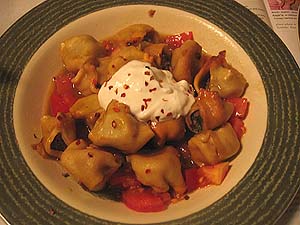 Sit down and enjoy!

To make your own stock
Combine 1 lb. skinless chicken pieces, 1 carrot, celery rib, 1 leek, 1 onion, chopped, 2 sprigs parsley, 4 peppercorns, 3 cloves, 1 cinnamon stick and 1 tbsp of rice in a pot with 9 cups of water. Bring to a boil, then reduce heat and simmer for about 2 hours. Season to taste with salt. Strain and reserve about 4 cups of the stock for this recipe.