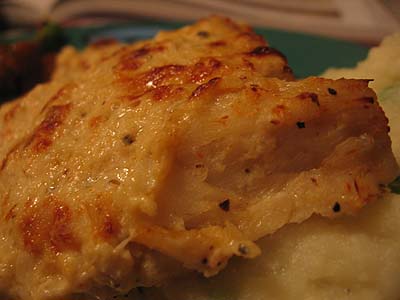 So, this is the last birthday post I will be making (well, this year). Relief all around, I know. It’s a birthday post because it’s a recipe from a book that I received for my birthday, from jwa’s parents (thanks, Jim & Edie!). It’s Ocean Friendly Cuisine by James O. Fraioli and it’s a beautiful book. I almost hate to cook with it, as I inevitably will plaster crustacean pieces, fish juice and who knows what the hell else all over it. Oh well, I will just have to take that chance I guess.

The first recipe I tried out of it was for Crab Crusted White Sea Bass with Green Onion Mashed Potatoes, Asparagus and Sweet Red Pepper Sauce. There’s quite a nice picture in the book that won me over — well that and the cream cheese. It’s really like tasty crab dip slathered on top of a nice piece of fish. How can I person not be tempted to try that?

Oh, as you’ll notice in the title, I did have to substitute Ling Cod for Sea Bass. According to my handy Seafood Watch card enclosed in the book, I was able to ascertain that Ling Cod was indeed an Ocean Friendly Substitution, since New Seasons had no Sea Bass when I was there.

Crab-Crusted Ling Cod:
for the 2 of us, I made two fillets, and used a bit less than half the crab topping ingredients, saving extra crab mixture for snacking

Preheat oven to 375. Combine the cream cheese, mayonnaise, mustard, powdered sugar, onion and seafood seasoning. Now, the actual directions say to mix the ingredients in a double boiler until smooth and slightly warm, but honestly, I just whisked them on the counter top, as you had to let it cool before adding the crab anyway. Lazy, I am! Add the sherry and then salt & pepper to taste. Blend well and then fold in crab. Set aside. 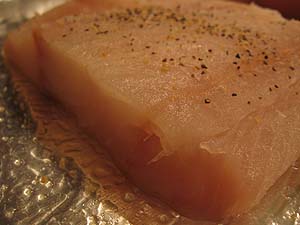 Season fish with salt and pepper and spread a liberal layer of your tasty crab mixture on top of each fillet. Bake for about 20-30 minutes, depending on the thickness of your fish. There’s no shame in using a knife to take a peek inside to see if it’s done. Just spread the cream cheese back on top. Now, if you’re using the sea bass, check after 15 minutes as it may cook a bit quicker than my ling cod did (they were huge fillets).

The original directions didn’t say to do this, but when my fish was about done, I turned on the broiler and let the top get a bit golden — this took about 1 minute or so. Serve your fish with the suggested green onion mashed potatoes or perhaps some rice pilaf, as well as sauteed asparagus spears, with or without the following red pepper sauce. 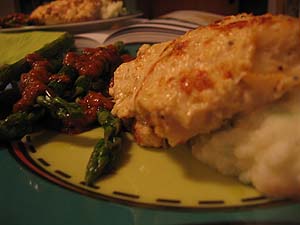 Combine all ingredients in a food processor and puree until smooth. That’s it. Serve atop asparagus.

We both really liked this dish and I am looking forward to trying it with sea bass, as well as any other fish I can think to cover with the crab crust. And really, what in life isn’t better with a little tasty crab crust?