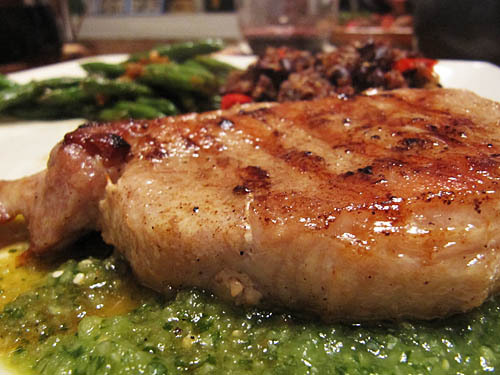 Sometimes a person just wants a big hunk of meat, preferable still attached to a bone. Grrrrr! This is a recipe for one of those times.

I really liked the sauce, as it had a very nice, fresh flavor and not too much heat. If you want more spiciness though, you can add more jalapeno or even give it a dash or two of hot sauce. For me, though, 1/2 a jalapeno was fine.

I also chose to brine my pork chops, instead of doing the rub. I thought I’d be a bit safer with the brine, as I have been known to overcook a pork chop or two in my time. There’s a brine recipe down at the bottom of this post, feel free to use that or just skip and do the marinating rub. If you do brine though, I would just sprinkle on some of the cumin and pepper before grilling. Skip the salt.

If you want to cook on a gas grill, I’ve included those directions from the original recipe. Myself, I just used a grill pan because it was cold and rainy outside.

Marinate chops:
Stir together coriander, cumin, salt, and pepper in a small bowl, then add oil and stir until combined well. Rub spice mixture all over chops. Let chops marinate at room temperature while making sauce. 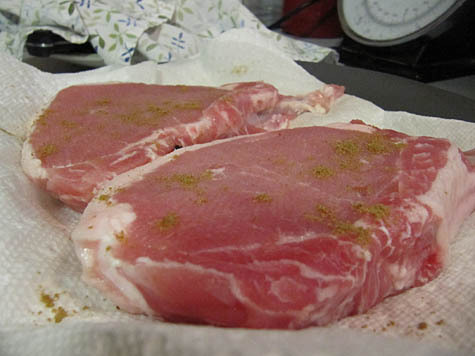 Make sauce:
Simmer tomatillos and 3 cups water in a 2 1/2- to 3-quart saucepan, uncovered, stirring occasionally, until tomatillos are just soft, 8 to 10 minutes. Drain and cool 15 minutes. 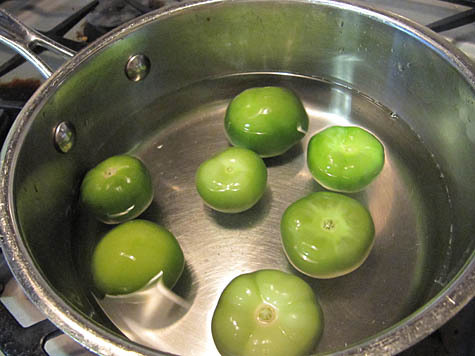 While tomatillos are cooling, core apples and cut rough chunks. PurÃ©e tomatillos with the apples and other remaining sauce ingredients in a food processor. Transfer to a bowl. 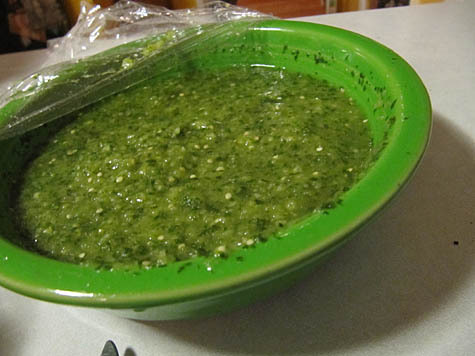 Cook pork on a well-oiled grill pan over medium high heat for about 6-7 minutes per side. Turn the heat down after the initial searing/grill-mark-making and cook until a thermometer inserted diagonally into center (avoid bone) registers 150Â°F. Transfer pork to a cutting board and let stand, loosely covered with foil, 15 minutes (temperature will rise to 155Â°F). 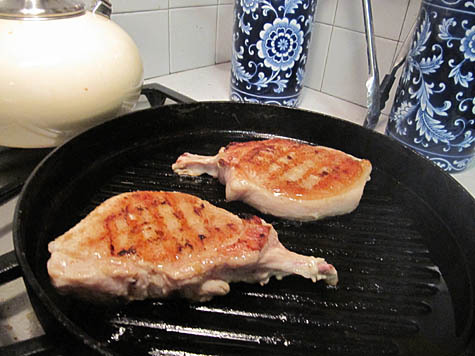 Serve pork chops with the sauce (but then I bet you already guessed that). We had this with some black beans and some sauteed green beans. Beans!

To cook pork using a gas grill:
Preheat all burners on high, covered, 10 minutes. Sear pork on lightly oiled grill rack, covered with lid, turning over once, until well browned, 10 to 12 minutes total. Turn off 1 burner (middle burner if there are 3) and put pork above shut off burner. Reduce heat on remaining burner(s) to moderate and grill pork, covered with lid, until thermometer inserted diagonally into center (avoid bone) registers 150Â°F, 12 to 16 minutes. Transfer pork to a cutting board and let stand, loosely covered with foil, 15 minutes (temperature will rise to 155Â°F).

Mix all ingredients until the salt and sugar have dissolved. Place the pork chops in the brine and store in the refrigerator for at least 4 hours and up to overnight. Remove, pat dry, and omit any salt in the seasoning before cooking.