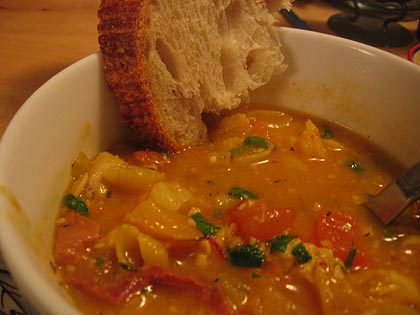 Waiter, There’s Something in My…is a new event hosted each month, alternatively by Spittoon Extra, Cook Sister! and Passionate Cook. The first theme is stew and is being rounded up here.

The timing for this food blogging event was perfect as jwa and I had been planing a Life Aquatic film festival. And what goes well with The Life Aquatic? Stew! Seafood Stew!

Steve Zissou: Now if you’ll excuse me, I’m going to go on an overnight drunk, and in 10 days I’m going to set out to find the shark that ate my friend and destroy it. Anyone who wants to tag along is more than welcome. But first — some fish stew.

Also, I’m really happy to see a new general cooking event now that IMBB seems to have died out and I’m even happier to be participating in this one. We started the festivities with an episode of Jacques Cousteau’s Odyssey, while munching on fried calamari (recipe tomorrow) and then, a Spanish fish stew while watching The Life Aquatic. It was a very nice way to spend a chilly Saturday afternoon.

This recipe is based on one that I found at the Whole Foods Market for a Spanish Fish Stew with saffron, smoked paprika and ground almonds. The original recipe however, just said to use about three fish fillets, which was um, pretty unspecific. So, I chose some salmon and shrimp, both of which we had in the freezer. I used a pound of seafood total — one half pound of each. The salmon worked pretty well but I think halibut would be really good in this also. Or cod. Or uh, whatever looks good that day at the store. Or whatever you have in your freezer. It’s all good.

Cue the storming the beaches of the Hotel Citroen music, grab your red hat, your campari and soda and let’s go… 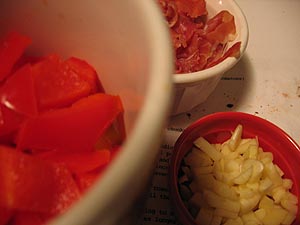 Heat the olive oil in a large soup pot over medium heat. SautÃ© the onions until translucent. Add the garlic and red bell peppers and cook 5 minutes more, until softened. Stir in the prosciutto and cook 3 minutes longer, stirring occasionally. 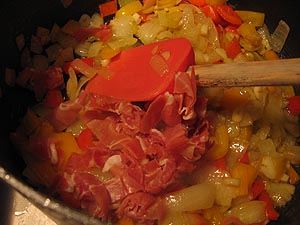 Add the tomatoes and increase the heat to medium-high. Cook, stirring frequently to prevent scorching, until the liquid has evaporated. Stir in the ground almonds, saffron, thyme, rosemary, salt, black pepper, red pepper flakes, and white wine. Boil until the wine has nearly evaporated. 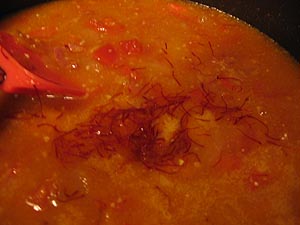 Pour in the stock, clam juice, lemon juice and pasta. Bring to a boil and cook 5-6 minutes until the pasta is almost done. Add fish and simmer, 3 to 5 minutes longer, until fish is done and pasta is tender. Adjust seasonings and remove rosemary sprigs. Serve with lemon wedges and toasted bread. 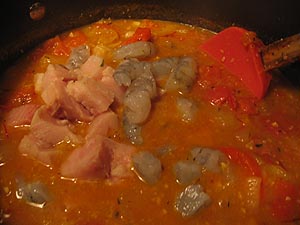 It’s funny — I really made the fish stew to go with the movie, rather than really, really wanting a fish stew. jwa was, in fact, wary of the fish stew. But — this was so good! A bit spicy and saffrony, it had a great flavor and was very filling. I really can’t wait to make it again. Now, I just need to decide what will make a good meal with the Rushmore/Royal Tenenbaums Festival that’s in the works… 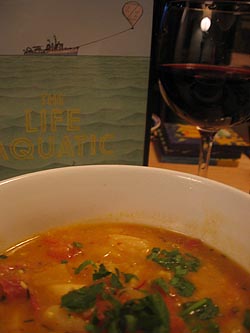 Thanks to Spittoon Extra for hosting this month’s event. I’m already looking forward to next month’s theme!

3 Replies to “Waiter There's Something In My… Stew#1”