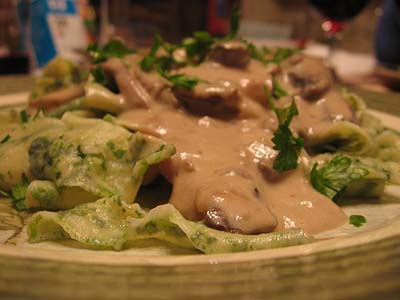 I really meant to get this up Saturday. But, Friday night, we went to the Argyle Winemaker’s Dinner at Oba! (recap of that dinner coming next week — probably Tuesday). Uh, there’s a lot of wine at a Winemaker’s Dinner. Thus, my Saturday consisted of: getting up, water, tv, water, leftover mac & cheese, advil, water, nap, feel somewhat ok but very lazy, make pierogis, eat, bed.

So, Sunday, it is! IMB22 is, awesomely enough, all about noodles and is hosted at Cooking with Amy. I love noodles. A few years ago, jwa even got me one of those nifty pasta machines.

I decided on a Stroganoff, as it’s a dish that I really like and unless you’re eating somewhere that has comfort food on the menu, you really don’t see it out all that much. As we ate tons of meat in California last month, I also decided to do a vegetable version using portobellas and a few button mushrooms.

To start, pop the 1 cup of frozen spinach in the microwave and heat for about 45 seconds. Take it out and put the spinach on a tea towel (or 4-5 paper towels) and wring all the excess water out. This should leave you with about 1/4 a cup of actual spinach (but you don’t have to measure it).

Place flour, eggs, salt and spinach in a mixing bowl or in the bowl of a stand mixer. I had a stand mixer and I used that. I gave it a few mixes with the spatula, then used the dough hook until it comes together. 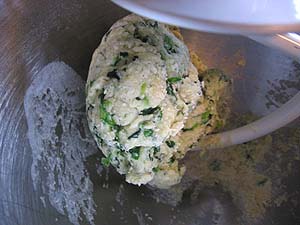 Remove dough from hook and knead a few times on a floured work surface. Mine was a bit sticky, so I worked a little more flour into at this step. Form the dough into tennis-sized balls and cover with plastic wrap. Let rest for about an hour. 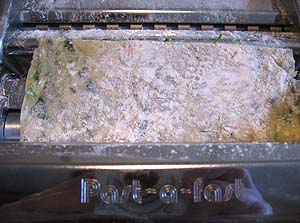 After an hour, I started working the dough through my pasta machine, starting on the biggest setting and working it through to the smallest. Dusting the machine with a little flour keeps it from sticking or tearing. If you don’t have a pasta machine, you can just use a rolling pin and roll the sheets out very thinly. 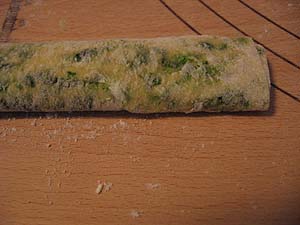 Next, I took each section of rolled-out dough (mine were roughly 4 X 6 inch sheets) and rolled it into a cylinder. 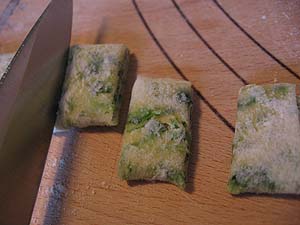 Then I cut it into little pieces. 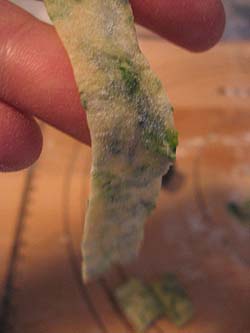 And unrolled each one. Do this like 70 times and you will have your noodles. Lay them out on racks and let them dry for an hour or two.

When ready to cook. Add noodles to gently boiling, salted water and cook for about 5 minutes. When you think they’re done, taste one to make sure. Toss with a little butter or olive oil to keep from sticking. 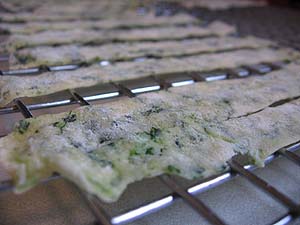 Heat the butter in a large skillet and melt completely over medium heat. Add the onion and garlic and cook until the onion is translucent, about 5 minutes. 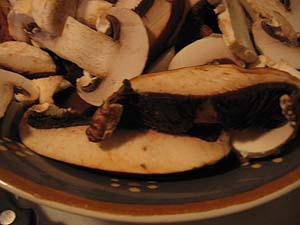 Add the mushrooms and cook until they shrink down a bit and release their liquid. Add the flour and stir, cooking a couple of minutes. Next, add the wine and the chicken broth, turn the heat up and bring to a boil. Reduce heat and simmer for, about 15 minutes until the sauce has thickened. 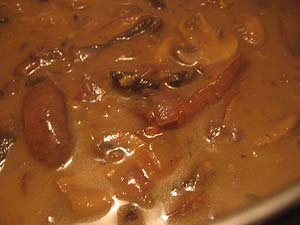 Stir in sour cream and thyme and serve over hot noodles. Garnish with fresh parsley. 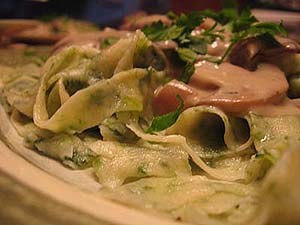 We really enjoyed this. The noodles were quite good and the sauce was very flavorful. The thyme worked great with the mushrooms and it was very creamy and satisfying.