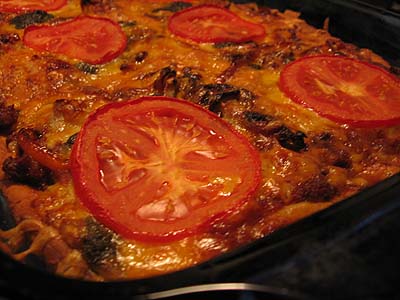 Yeah, I’ve been out of school since 1995 — so? I used to make this both as an undergrad and a grad student. It’s cheap, it’s quick, it’s easy and it’s Mexican food and yet it’s a pizza. It’s awesome. And really, you can fancy-pants it up as much as you want. You could make your own pizza dough, make your own enchilada-type sauce, roast peppers, shred chicken, etc., or you could use the 99 cent Jiffy Pizza dough mix, buy jarred sauce and eat dinner for two+ days for around $10.

For old times sake, I usually go the pizza dough in a box, sauce in a jar, veggies-only route but that’s just me — for I am both sentimental and lazy.

Heat one teaspoon of vegetable oil in a pan. SautÃ© the onions and bell peppers (sprinkled with a little salt) until caramelized and a bit darkened in color. Set aside.

Make the pizza dough but add the cumin and chile powder. Press it into a lightly olive oiled, lasgane-sized baking dish (the 15-inch by 12-inch or so variety). I usually go up the sides about a 1/2 inch. Brush top of dough with about 1/2 tablespoon of olive oil. 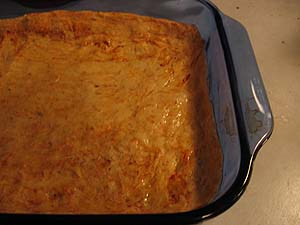 Bake crust at 425 degrees (or the temperature the box says) for about 10 minutes. Remove from the oven.

Spread refried beans on top. Cover with a layer of enchilada sauce. Add the sautÃ©ed veggies. Next comes the shredded cheese, followed by a sprinkle of black olives and the tomato slices.

Return to the oven and bake until all bubbly and the cheese starts to get golden — about 20 minutes. Remove and let sit for at least five minutes so it’s easier to cut into pieces. 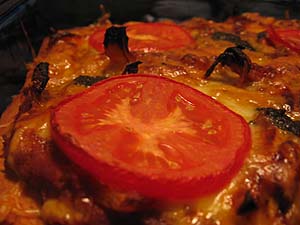 Serve with the garnishes on the side and be happy you don’t have to study for anything.