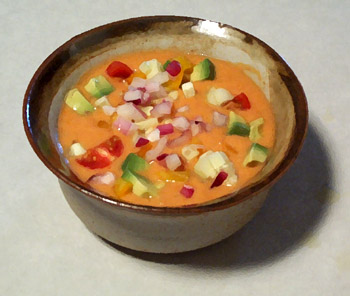 I’m always looking for non-cooked, lighter dinners to have when it’s hot out. Gazpacho is a promising subject, but I’m usually somewhat disappointed by what I try to make at home. There’s a place in California — Gayle’s in Capitola — that we went to once and I had the gazpacho. So, so good. Why did we only go there once? Huh? Yeah, I don’t know either. Oh yeah, we are lame.

Also the gazpacho at Lauro Kitchen here in Portland is pretty good too. But it seems I can never replicate that, “wow, this is woooonderful” quality at home when it comes to gazpacho — it continues to elude me.

Oh, I will play your game, you rogue.

And…this challenge is made all the trickier by the fact that, well, I don’t really like cucumbers all that much except under certain circumstances. Exceptional gazpacho being one of those*. So, I am now on a gazpacho quest. I’ve recently come across a couple of recipes that sound interesting and I am going to try them (hopefully, to super-tasty results). The first one up is traditional in style and is a mish-mash of a number of different recipes I’ve found for the basic tomato-cucumber-pepper concoction. This one, however, includes using stale bread in the mix — something I’ve never tried before.

A hunk of day old bread, crust removed, cut into cubes (I used Garlic & Romano Sourdough bread form New Season’s Market, because we had some and it was indeed day old. In fact, one could call it slightly stale
1 clove of garlic
3 medium tomatoes, cut into chunks
1/4 teaspoon ground cumin
1 teaspoon salt
A bit less than 1/4 cup olive oil, preferably extra-virgin
1 tablespoon red wine vinegar
1 cup chicken stock (or so)
1/2 an English cucumber, cut into chunks + plus some diced nicely for top of soup
1/4 of a red onion + plus some diced nicely for top of soup
1 green pepper, mostly chunked up, but reserve some to…you guessed it…dice nicely for
top of soup

Place bread in a bowl and add chicken stock to cover, letting soak for
about 5 minutes. Meanwhile, put tomatoes in blender and pulse a few times.

Squeeze the excess stock out of the bread and place the bread in the blender, along with
the garlic. Blend until smooth. The mixture will turn a light red to pink color. In the original directions I had read, it said to blend the bread and garlic together alone, but when I tried that, the blades just whirled around, doing nothing to the bread. It needed some liquid. It worked much better when I took the bread out and pulsed the tomatoes in there first. So, there you go.

Add cumin, salt, cucumber, onion, vinegar and green pepper. Blend some more. Open top and stream in olive oil. Now transfer to a container and refrigerate for a couple of hours. To serve, sprinkle the diced veggies on the top. When I did this, I also included some diced avocado because I had half of one that I needed to use.

This will make about 2 big bowls.

Overall, I really liked this version. I’ve usually made a chunkier gazpacho before, but I think I may prefer the smoothly blended style. I also liked including the bread in the gazpacho. Normally, I would just blend half the veggies and stir the other half in, but with the bread there (and blending all the veggies except for a few for the top), it was definitely more creamy and perhaps a bit mellower. I want to tweak the seasoning and ratios of veggies a bit next time, but overall, I was pleased. So was jwa, who asked for more. Ha! There was none. Not because I am mean & greedy, but whenever I usually make gazpacho, there are always leftovers that no one eats. Gazpacho is very sad after 3 days in the refrigerator.

Since I like the little icons so much….I will give this recipe 3.5 garlic presses (out of four)!

* Another exception to the “I don’t really care for cucumbers” rule is garlicky-cucumber-yogurt sauce, otherwise known as Tsatziki. Yum!