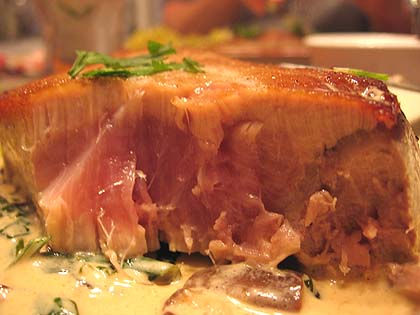 I’m typically a pretty simple girl when it comes to tuna — a grill pan, some oil, salt & pepper and some soy sauce for dippin’ and I’m done. Okay, maybe a few more things but you know what I mean.

However, the other day, I had some cream left over from the basil ice cream, so I decided to go all out and make this cream sauce for our tuna. Damn! It was good. 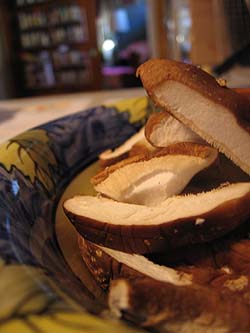 Sprinkle one side of tuna steaks with pepper and a little salt. Heat 2 tablespoons oil in heavy large skillet over high heat. Place tuna steaks, pepper side down, in hot oil and sear 2 minutes. Sprinkle side facing up with a little salt and pepper. 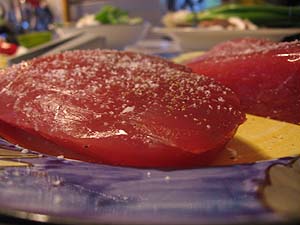 Turn tuna over and continue cooking to desired doneness, about 1-2 minutes for rare. Transfer tuna to a plate and cover with foil to keep warm. 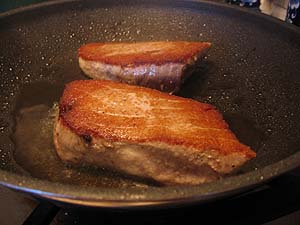 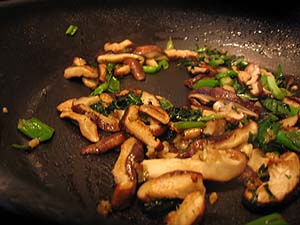 Add whipping cream and simmer until sauce lightly coats back of spoon, about 3 minutes. Stir in lime juice. Taste and add the remaining tablespoon of soy sauce if desired. 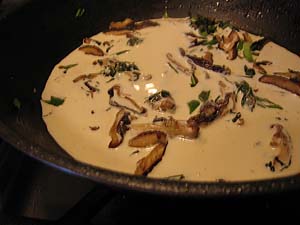 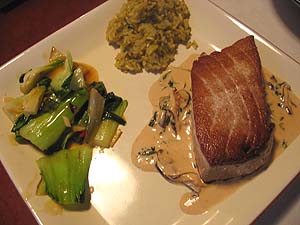 On the side
We had some green tea brown basmati rice (throw a tea bag in the water right before it starts to boil, let it steep for a minute or two before you add the rice, then remove the tea bag and cook rice as usual). Rounding out the plate was some baby bok choy — Stir-Fried Shanghai Bok Choy with Ginger, that is. 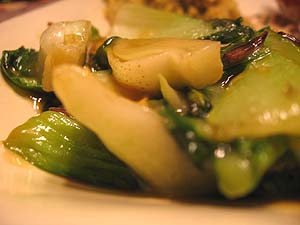 Cut half of ginger into very fine matchsticks (less than 1/8 inch thick; about 1 tablespoon) and reserve. Grate remaining ginger and squeeze pulp with your fingers to yield 1 teaspoon liquid, then discard pulp.

Remove any bruised or withered outer leaves from bok choy. Trim 1/8 inch from bottom of each bok choy, then cut each head into quarters. Wash bok choy in several changes of cold water and dry in a colander or salad spinner until dry to the touch.

Heat wok over high heat until a bead of water vaporizes within 1 to 2 seconds of contact. Pour oil down side of wok, then swirl oil, tilting wok to coat sides. Add ginger matchsticks and stir-fry 5 seconds. Add bok choy and stir-fry until leaves are bright green and just limp, 1 to 2 minutes. Stir broth mixture, then pour into wok and stir-fry until vegetables are crisp-tender and sauce is slightly thickened, about 1 minute. Remove from heat and drizzle with sesame oil, then stir to coat.

***
In other news I start a new job soon — Internet Marketing Manager at Stash Tea. I am very, very excited and looking forward to this new position.